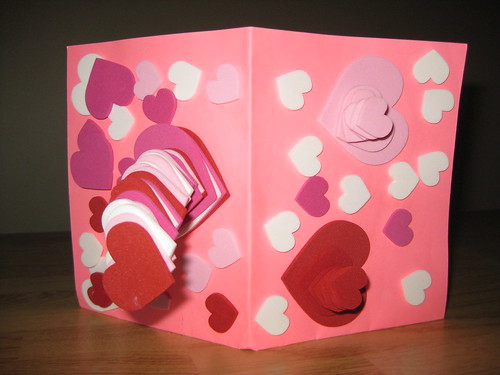 Valentine’s day is celebrated in the United States every year on February 14th. There are many stories and legends behind who the real St. Valentine was, but most scholars agree that he was a martyr who was killed by Roman soldiers because he was marrying people in secret at a time when marriage was outlawed.  Later in the Middle Ages, a great writer named Geoffrey Chaucer wrote a poem as a present to King Richard II, who was going to be married soon. In it, he mentioned St. Valentine, and over time, the idea of Valentine’s Day became associated with the idea of love.

During the Victorian times (in the 1800s), Valentine’s Day became extremely popular! Men and women spent a lot of time making beautiful Valentine’s cards with ribbon, fancy paper and even lace. In those days, people were very reserved and they did not often say what they were feeling. Valentine’s day gave them a way to express their feelings to someone they were in love with anonymously.  The sender would remain a mystery until they could speak more freely.

In the last few decades, Valentine’s day has changed a lot! Today we still exchange cards, but many people buy ready-made cards instead. We also give flowers or chocolates as a gift to remind people of our friendship and love for them. Most Valentine’s gifts and cards make use of the colors red and pink, and are decorated with images of hearts or roses. Another common symbol of love on this day is Cupid, the Roman god of love. He is usually shown as a little angel with a bow and arrow. According to legend, anyone who is struck by his arrows will fall in love.

Here are some links with ideas about how you can celebrate and have fun with the children you care for over the next couple of weeks!

Check out our Au Pair in America Pinterest page for Valentine’s Day for more ideas: https://www.pinterest.com/aupairinamerica/valentines-day/ Au Pairs give loving care to their host families every day.  Au Pair in America has provided 27 years as the world’s most experienced intercultural  childcare program.

Au Pairs come to the USA for cultural exchange and to provide childcare to busy families.  They stay for one year and then have the option to extend for a second year.  Au Pairs are 18 to 26 years old when they arrive in the USA.  Please check out www.aupairinamerica.com for more information!

Au Pairs will be making Valentine cards with their host children.  Here’s how:

How to make it: